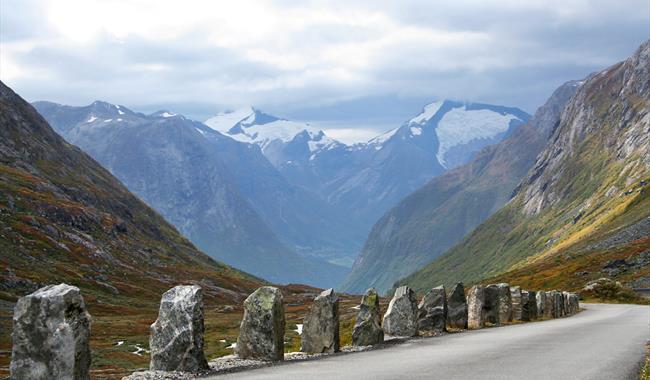 The Norwegian Scenic Route Gamle Strynefjellsvegen runs from Grotli to Videsæter, a total distance of 27 km (Road 258). The small village of Hjelle also plays an important role in the tourist route since the old road starts at the jetty in Hjelle.

In previous centuries Gamle Strynefjellsvegen was the only road between the villages of Skjåk and Stryn. The road stretches for 27 kilometres and is part of our cultural heritage. Old, handmade stone walls and long rows of guard stones are the hallmarks of this mountain crossing that dates back more than a century.

This is a narrow road that twists at one with nature through the Strynefjell pass, a bit of Norwegian road-building history, which was the only road for vehicular traffic between Skjåk and Stryn for most of the previous century. In 1997 the road was designated a tourist route, and was upgraded to a National tourist route in 2003.

Between the mountain community of Skjåk and the town of Stryn on the fjord, there were for years several paths for packhorses for transporting people and essential goods. It was difficult and slow going. In 1881 the decision was made to build a road between Grotli and Hjelle, and there was great excitement when the first wagons could set out on the road in 1894.

The "new" road:
I 1978 the Strynefjell Road was superseded by a new 12-km-long all-year road with three tunnels. However, the old road still provides both a vista and a perspective on natural history. For it is not only the manual labour and the story of its construction that makes it a scenic road. Along its length of 27 km, the Strynefjell Mountain Road demonstrates the tension between the topography of east and west, the ancient, rounded forms in the east, and the sudden drop and the more recent alpine forms in the west.

Here you will find a true wilderness, inhabited only by birds and animals adapted to an arctic climate, perhaps a predator in search of prey, a wild reindeer, a golden eagle, or sheep in summer pastures. Here there is plenty of space – and plenty of time. Change down to a lower gear and head into the mountains.

Experiences:
When the mountains don their autumn garb, Gamle Strynefjellsvegen looks really magnificent. Nature is beautiful at all times, but the glowing autumn colours convey a completely different radiance and experience. Everyone who likes to be close to rushing cascades must take the time to stop at the viewpoints at the Øvstefossen and Videfossen waterfalls. If you prefer to cycle, you will be richly repaid for your exertions on Norway’s oldest tourist route.

Cycling:
Gamle Strynefjellsvegen is a relatively short route where you get a genuine road history experience. It is easiest to start at Grotli. You cycle the first part on a gravel road and the birch wood gradually disappears as the mountain landscape opens up. After passing the summer ski resort you will have a great downhill stretch with a wide view towards the valley and the surrounding mountains, as well as a number of great waterfalls. When you reach Lake Strynsvatnet at the bottom of the valley, you should include a stop at Hjelle.

Winter notice: The route is closed during the winter season. It is normally closed in October and reopens in June.

Opening and closing of scenic routes closed in winter and statistics >>