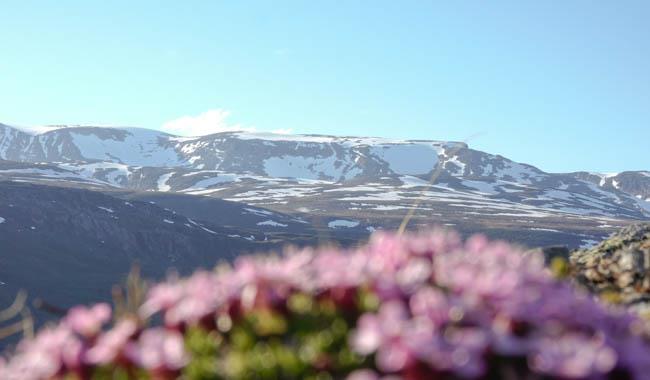 Breheimen means "the home of the glaciers". The National Park -  established in 2009 - is located in the municipalities of Skjåk and Lom in Oppland county and in Luster in Sogn og Fjordane county, Norway. The park covers 1,671 square kilometres (645 sq mi) of the Breheimen mountain range.

Breheimen has some of the wettest and the driest parts of the country. The park spans from almost sea level to well over 2000 m.a.s.l. The landscape has been shaped by glaciers, avalanches and other geological processes through hundreds of thousands of years. Today, you can see everything from lush valleys with transhumance dairy farms to barren mountains and glaciers. Breheimen is one of the most varied national parks in Norway.

Hiking in Breheimen National Park:
With its close on 300 km of marked paths, Breheimen has been tempting hikers into the mountains for many years. Yet many of the routes are among the most demanding in southern Norway, partly because the marked paths in the area are fewer and not so visible in the terrain as in more visited national parks, and the cabins are mostly self-service. When you are hiking in Breheimen, you experience the stillness of nature and magnificent valleys, plateaus and peaks.

In summer, you can meet grazing livestock on the many transhumance farms. The Hestbrepiggane are the loftiest peaks in Breheimen, and Nordre Hestbrepiggen reaches 2172 m a.s.l. Tverrådalskyrkja (2088 m a.s.l.) is perhaps the best-known peak, towering over one of the paths from Sota to Nørdstedalseter. Wherever you begin, the ascent of Tverrådalsskyrkja takes a whole day. The most widely used routes into the Breheimen National Park are via Sota, Lundadalen, Grotli, Høydalen, Sognefjellet, Nørdstedalen, Mørkridsdalen, Vigdalen, or along Vanndalen and Vivatjønni in the valley of Jostedalen.

Several companies and mountaineering huts offer guided walks in the park, both easy skiing and rambling trips and more demanding climbs on glaciers and peaks. Several lakes and rivers in Breheimen have good trout fishing, particularly the larger lakes. Fish have been released to improve the stocks in many lakes. Remember to have a fishing licence.

Glaciers, peaks, upland plateaus and transhumance valleys
The western part of Breheimen is a rugged landscape of steep mountains and deep valleys, but the eastern part is more gently sloping. This is partly because the western part is dominated by hard Precambrian bedrock, whereas softer, more easily weathering schists predominate further east. Another reason is that during the ice ages it was mostly the glaciers west of the watershed that scoured out the terrain.

In the east, distinct traces of the gentle pre-glacial terrain, called the palaeic surface, are still to be seen. Moraine soils left behind by the retreating glaciers offer a good basis for plant life.

The valley of Dummdalen has the largest limestone caves in southern Norway. They were formed by water slowly dissolving the limestone over thousands of years and are therefore very vulnerable to damage.

Lakes and rivers
B​​reheimen has numerous rivers and a wealth of waterfalls that tumble down the mountainsides. Several of the rivers flowing mostly or entirely within the park have been protected for many years from being developed to generate hydroelectricity. They include the Mørkrid, Stryne, Måråe, Glitra, Blankåe, Ostre (and Tundra), Skjøle and Bøvre. The rivers, which originate in the many glaciers, help to ensure very varied plant and animal life. Drivandefossen, in the valley of Mørkridsdalen, is the best-known waterfall. 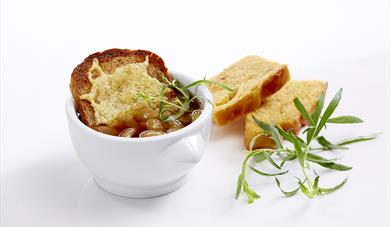 Skeid Kro | Restaurant, SkjåkTo preserve and develop the unique food tradititions in Skjåk, Skeid Restaurant lay stress on the original, genuine and popular. The restaurant are located in Skjåk, midway between Lom, Stryn and Geiranger. 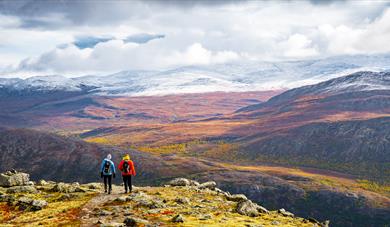 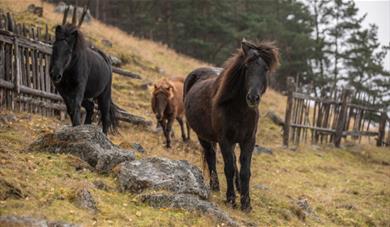 Fjelleventyret | Horse Riding in the Mountains, SkjåkFjelleventyret provides rides for all levels of experience, fitting each trail ride to the level of each rider, ensuring a relaxing and beautiful atmosphere for all! The rides venture through some of the most scenic areas in Norway.