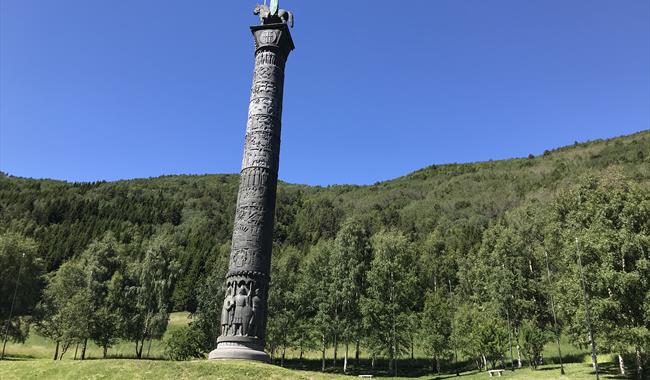 The Saga Column until 1992 called "Eidsvollsmonumentet", is a 34 meter high column with sculpture and reliefs - designed by the sculptor Wilhelm Rasmussen in the 1920s. The artwork was completed and erected in 1992 at Elveseter tourist hotel in Leirdalen, a side valley to Bøverdalen in Lom municipality.

The pictures on the statue shows Norway's history from the battle of Hafrsfjord until the country got its constitution at Eidsvoll in 1814. At the foot of the pillar we find the King's reef. At the top is a rider statue by Harald Hårfagre, the king who gathered Norway as a kingdom at Hafrsfjord.

The  history of The Saga Column
As early as 1836 the poet Henrik Wergeland issued a call to the Norwegian people to build a memorial to mark Norway’s independence, enshrined in the Constitution of 1814. The monument was to be built outside the parliament building in Eidsvoll and was to be called "Eidsvollsøyla" – the Eidsvoll Pillar. The sculptor, professor W. Rasmussen, won the competition to design the monument. The pillar’s decoration represents the history of Norway from the unification of the country in 872 up to the National Congress in 1814.

When the war began in 1940 the pillar was half-complete in Kyanite, and the rest modelled in plaster. The War brought work to a halt. When the matter was again brought up in Parliament, political disagreement unfortunately prevented work from re-commencing. The pillar lay for 20 years until Åmund Elvesæter took the initiative to have it erected. After three desperate attempts to have it located in Lillehammer, Åmund Elvesæter saw no alternative other than to take the matter into his own hands. The pillar was completed in August 1992. From its foundations to the top of the crown the pillar is 131 feet high. It stands 108 feet over ground level. 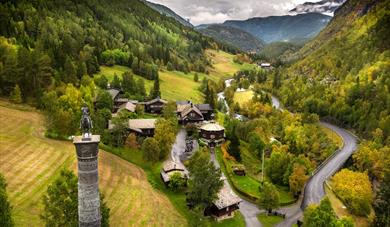 Elveseter | Hotel, LomThe old family farm Elveseter has received guests since the 1870’s. Throughout the last century the farm has been transformed into one of the most unique hotels in Norway.